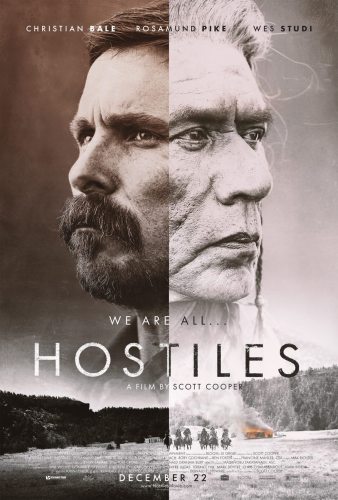 Hostiles is a Western in the “The Old West is dying” sub-genre. The frontier is represented by the main character, Captain Joe Blocker (Christian Bale), and Cheyenne Chief Yellow Hawk (Wes Studi). Chief Yellow Hawk has been imprisoned for seven years and is now riddled with cancer. For political reasons related to the rising tide of public discomfort with the treatment of the Indians, Joe is ordered to escort the chief and his family to the chief’s ancestral lands in the Valley of the Bears in Montana. Joe at first refuses, because the chief had viciously killed some of Joe’s friends in warfare, but Joe’s colonel holds something over the captain’s head–that Joe, who is about to retire, will be court-martialed and likely lose his pension if he disobeys the order.

Good soldier Joe dutifully sets off, and quickly runs into Rosalie Quaid (Rosamund Pike), whose husband and children have just been slaughtered by a savage band of Comanches. Later joining them on this dangerous journey, and adding some menace to it, is Sgt. Charles Wills (Ben Foster), an axe-murderer who is being sent back to his fort to be hanged.

Hostiles is an art-house film that would have benefited from an attempt to make it a little more commercial. It is meditative in the extreme, which is appropriate for the material, but this leads to it at times being glacially paced, which sometimes caused this audience member to quit meditating on its themes and drift away into my own thoughts. Extending the (realistically) very quick and brutal action scenes and cutting back on the shots of scenery would have kept me more engaged with no harm done to the filmmakers’ intent.

Despite this, Hostiles ends up being a powerful film that will linger with the viewer after the final reel has ended. Writer and director Scott Cooper (Crazy Heart) resolutely refuses to make his characters one-dimensional and the moral quandaries reflected upon simple. The performances are terrific all around, but Christian Bale is especially superb–his ability to convey a world of emotion with a single look or expression is astonishing.

And, yes, although there is too much of it, that scenery is gorgeous. If Hostiles is of interest to you and playing in your area, try to see it on the big screen where it belongs.