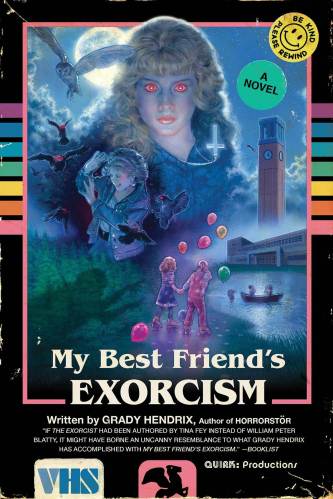 It was 1982 when Abby Rivers met Gretchen Lang, becoming fast friends when Gretchen saves Abby from what looked like was going to be the most horrible, awful day in insecure Abby’s whole life. They build a world of inside jokes, shared loves, favorite songs, forbidden books and movies, and anything else fun as they move through junior high into their high school years.

It’s now 1988, and Gretchen vanishes from a lake party with enough illicit activities going on that her friends are too scared to immediately call in authority figures. She shows back up the next day, naked and acting odd.

Abby knows something is wrong inside her friend, but everyone else wants to blame an outside culprit–the natural changes of the teenage years, drugs, or the bad influence of Gretchen’s social circle. Abby is at a loss as to what is going on as Gretchen spirals downward until an unexpected diagnosis comes from an unexpected source, and is the only explanation that seems to make sense–Gretchen is possessed.

My Best Friend’s Exorcism is probably about as charming a book about demonic possession and all the horrors that come with it as could possibly be written. Grady Hendrix captures growing up in the ’80s extremely well–I track the characters age-wise exactly, so I was in the same grade as the characters the same year, and, yep, this is what it was like. Anyone in my cohort will get a kick out of it just for that. And anyone can understand the emotional highs and lows of those high school years, also captured extremely well.

All of which easily overrides the book’s few flaws. I think Hendrix deliberately made his authority figures as shallow as the ones in Rock n’ Roll High School, and I do wish he would have given them a little more depth–that would be possible and have them still not be willing or able to understand what is going on around them. And the book does drag in the middle, but not for long–when the vomit starts flying, you won’t want to put it down.

Those are minor complaints about a book that is right in so many other ways, from small things like the fact that no one actually understands what the Go-Go’s are singing in “We Got the Beat,” to big things like the importance of friendship in surviving the very worst of times.

And, among other things, it’s a book about doing the right thing. Against all odds.